The Venus flytrap has captivated people across the world; the plants actually grow in an incredibly small geographic area. In the wild, they are found in a 700-mile region along the coast of North and South Carolina. Within this area, the plants are further limited to living in humid, wet and sunny bogs and acid wetland areas. Because Venus Flytraps are so scarce, some early botanists doubted their existence, despite all the stories about a flesh-eating plant.
So, how did the plant end up with the intriguing name of Venus Flytrap? It’s not too hard to imagine how ‘Flytrap’ might relate to its insect-catching abilities. 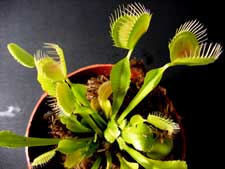 But how to choose a Venus Flytrap Plant to buy? Unless one lives where Venus Flytraps grow naturally, one probably won’t be able to just plop one into the dirt in the garden and watch it grow. However, if one is willing to invest a little time and effort, one can certainly grow Venus Flytraps at home. There are two ways by which one can acquire a Venus Flytrap plant.

2) Local garden centers. Sometimes grocery stores with flower shops will feature carnivorous plants for sale at certain times of the year. The plant may be stressed but with a little love and care will prove to be not only and educational interest but also an unusual conversation plant. The kids love it. Just don’t let them feed it or snap the traps too much or the plant be stressed and die sooner than later.