Japanese beetles were introduced to the U.S. via iris roots that were imported from Japan in 1916. Since that time they have been a pest problem growing each year to the point that today they are a major pest problem in the Midwest. 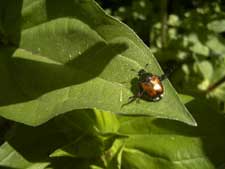 A few years ago, I did not know what a Japanese beetle looked like. Now I know that the iridescent metallic copper green beetle is pretty to look at but a menace anywhere it lands. It has a non-discriminating diet that feeds on over 270 varieties of plants, trees, seemingly anything that’s green and growing. There are some plants that it prefers and will fly for miles to find them. It especially like to skeletonize the leaves of brambles (raspberries, blackberries, etc.) roses, fruit trees, lindens, maples, gray birch, poplars, hazelnut etc. They love my purple plum tree, or should I call it purple lace tree. I use it as the “sacrificial attractant” so that they stay away from the raspberries. If you shake the tree, a swarm of beetles will disperse and land in my raspberry patch to continue the mating and feeding frenzy therefore, I leave the tree alone.

The beetle’s grubs are also lawn pests and feed on turf roots. One year in June, there were mounds of emerging adult Japanese beetles on the soggy greens of the golf course. It made golfing difficult since they would crunch under your feet as your walked and dispersed in the air when disturbed, landing in your hair, on your face, not to mention ricoquette the golf ball which did not help my golf score.

Chemical Control
In areas where you can spray your shrubs and perennials, carbaryl (Sevin) is recommended. Be aware that Sevin is toxic to bees. Other suggested chemicals are Orthene (acephate) , Tempo (cyfluthrin) and Merit(Imidacloprid) which is a systemic and should be applied early in the season so the plant can absorb it. Always read the label before using any chemicals.

Grub control
The USDA has done some research and found milky spore disease, (Bacillus popilliae, Dutky), commercially available as Merit), to be an effective biological grub control but it needs 2-3 years to build up in the soil to work. Use it only if the grubs are a turf problem.

Cultural Control
Trapping the beetle with an attractant will bring more beetles into your area causing more damage. So, unless you can find someone to put up a trap in their yard, forget about it.

One way, to capture these beetles is to put some alcohol or soapy water in a jar, place the jar underneath the plant and knock off the beetles into the jar covering the top. Once trapped, they drown in the solution. This safe, chemical free method seems to be an effective, yet a labor intensive job. Birds, toads, moles, shrews and skunks will eat a large number of adult beetles and grubs but seemingly not enough.