Commonly called lady beetle, the Asian Lady beetle, Harmonia axyridis, was introduced from Japan as a biological control for tree-inhabiting aphids. It was initially released by the USDA in Louisiana and Mississippi in 1979 and now is found in many locations in the Midwest. 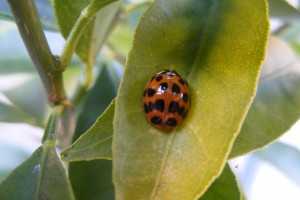 Individuals come in a variety of colors ranging from pale-orange to a deep orange-red. They can be distinguished from other lady beetles by a pair of white, oval marking directly behind the head forming a black M-shaped pattern and zero to 20 black spots on their body. They are very prolific and live up to 3 years. Lady beetles inhabit various trees and feed on aphids, psyllids and certain scales.

Because they are very prolific and an important biological control agent, Asian Lady beetles have been effective in eliminating and controlling the populations of many types of damaging aphids.  They have also managed to become a nuisance when they aggregate in large numbers on the sunny sides of buildings and cluster inside homes through openings and cracks. Typically, this “congregation” happens in the fall when they swarm like bees and land on people. They land on the skin and feed on perspiration occasionally causing a pinching sensation. This physical irritation leads us to believe that they bite. In fact, they do bite. Lady beetles have mandibles which are designed to break the delicate membrane of soft bodied insects such as aphids but not the leathery exterior of human skin.

To uninvite your lady beetle houseguests, seal the cracks around windows, doors, siding, and any openings with caulk . In addition, check your attic, cool room or chimney, for they are looking for a cool place to winter over. Indoor gatherings can be removed with a vacuum cleaner. If necessary, building exteriors can be treated with a pyrethroid-based insecticide in late September or early October. Although they may voluntarily leave after a few days or weeks.

Spraying insecticides, squashing them may result in orange staining on the walls and fabric. The orange stain is actually blood that comes out of the joints of the legs when the beetle is stressed (reflex bleeding). This protective mechanism tastes bad and produces a foul odor. It is easier to get the broom or vacuum and sweep them up and put them back outside away from the house.