I have 2 trumpet vines, planted last year. This year there were only a few flowers on one and none on the other. Am I supposed to cut them back in the fall or spring? 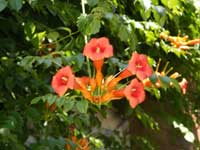 Trumpet vine, Campsis radicans  is a fast growing vine and sometimes considered invasive in warmer climates. Once established, it spreads by underground runners and seeds and can be difficult to control.

For best bloom plant in full/part sun, well drained soil, low moisture and no fertilizer. If it doesn’t bloom well, chances are that you are pampering it too much.

Prune the vine in early spring to shorten and remove dead wood. To control aggressive growth cut it back to the ground and it should resprout. The orange tubular flowers are produced on current seasons growth and attract hummingbirds and bees.

All parts of this plant are poisonous and care should be taken when handling the plant as some can get a skin reaction to the foliage.