Bay laurel (Laurus nobilis), Bay Tree, Sweet Bay has been grown as an ornamental plant since ancient times. It is an aromatic evergreen Mediterranean herb that has dark green, glossy, leaves, produces pale yellow flowers followed by black shiny berries (bacca-laureus). A slow-growing, frost tender perennial, Bay laurel makes an ideal trimmed potted plant that can grow up to 10 feet but most likely 5 feet in a container which should be brought indoors for the winter where it will remain green but dormant.

Care
Bay laurel is grows best in fertile, light, loose soil, full sun to partial shade and moderate temperatures. Because it is susceptible to sunburn, grow it in dappled shade during the hot summer. Bay laurel is slow and difficult to propagate.  It is easier to purchase a potted plant from the garden center.

Root cuttings
To root bay laurel take a 4 inch cutting of new growth and strip away all but the top 2 leaves, dip in rooting hormone and plant in a 1/2 sand 1/2 peat mix. Cover with clear plastic and place in a warm shady area. Cuttings can be taken 8 weeks after new spring growth and rooting can take up to 6 weeks. Late summer/early fall cuttings are slower to root and will take several months. It can also be started from seed in early spring.

The leaves of bay laurel can be dried whole or crushed and used in cooking. It can be harvested all year round but the best time to dry the leaves is in August when the leaves are most favorful. It is used as part of the classic bouquet garni which consists of bay leaf, thyme, marjoram, parsley and black peppercorn tied in a muslin bag. The oil is used for treating internal disorders, ear aches, rheumatism, ointments, soaps and perfumes even an insect repellant. The leaves are also used in garlands, funeral and memorial wreaths.

Laurus nobilis is not poisonous, whereas most other laurels are.
Troubleshooting
Bay laurel tends to get scale , small, brown, raised spots clustered on the undersides of leaves and along the stems. Powdery mildew can also be a problem. “Shot hole disease”-fungus that causes purplish-red spot on the leaves. 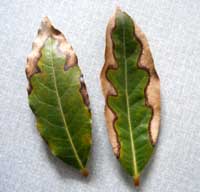 Leave a Reply to Maryjane Click here to cancel reply.