In recent years the popularity of microbreweries and home brewing has been on the increase. Unfortunately, due to a higher demand and rising shortage of hops, the cost of beer production has increased – all the more reasons to grow your own hops. 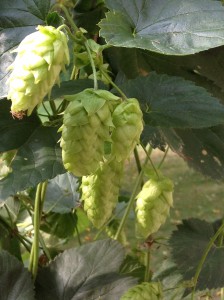 Hops is the bittering agent that gives beer its distinctive flavor and a key ingredient in making beer. There are many varieties, each imparts a different aroma and flavor to the beer.

Hops (Humulus Lupulus) is a hardy perennial that is grown from the rhizome of a female hop plant. It can grow vines up to 25 ft in one season which will die back in the winter. It requires 120 frost-free days to produce ripe flowers and given the right conditions will yield 1/2-2 pounds of dried flowers per vine.

Growing hops
Plant the rhizome in full sun and deep in well-drained soil, with a ph of 6-7.5. The top of the rhizome should be 1 inch below the soil surface. If you plant more than one variety, plant them at least 5 ft. apart to avoid mixing of vines, otherwise plant them 3 ft apart. When the vines are 1 ft tall be sure to provide a trellis or support ( twine) to climb on and choose the best 2-3 vines to wind around the support. Leave a few for backup (in case of frost destroys one) and prune away the rest . Once they get started they can grow as much as 12 inches per day. Around the end of June the plant will grow sidearms (flowering stage) which produce the hop cones.

The first year of growth is critical in establishing the root system, so be sure to keep the plants well watered (not soaked) weed free and mulched. A side dressing of a balanced fertilizer or compost tea during the growing season will help produce optimal growth. You may not get many hops the first year but production should increase in subsequent years.

Harvesting hops
Usually, there is little to pick the first year but by the second year, there should be enough to harvest. Typically, they can be picked at the end of August or September before a frost. The cones should be yellowish to a pale green color and feel papery and light. To test if they are ready to pick squeeze a mature hop between your fingers, if it stays compressed, feels soft and damp , then they are not ready. If it springs back and emits a “hoppy”aroma then it is mature enough to pick. Mature cones will have a dark yellow powder known as lupulin which is in the center of the cone. Lupulin contains all the acids and oils that emits the hoppy aroma and can make you “loopy”. It is what flavors the beer.

After harvesting, hops need to be dried or they will spoil. A food dehydrater works nicely. If you don’t have one, place your hops on a screen and dry outdoors away from direct sun or dry them in your oven at a low temperature. Place dried hops in vacumn sealed or ziplock bags squeezing out as much air as possible, then store in a freezer. To test if your hops are dry enough, pull on the petals if they break off easily and the inner stem is brittle enough so that is breaks instead of bends, then your hops are dry enough to store.

Hop rhizomes can be purchased at homebrew supply stores as well as on the internet.
Even if you’re not a brewer, hops make an attractive ornamental vine which can be used to make decorative wreaths.
source: www.uvm.edu/-pass/perry/hopsmore.html http://brewery.org/brewery/library/HopGrow.html