Rosemary officinalis is a member of the mint family and a native of the Mediterranean whose history trails back to 2500 years. The needle like, gray green foliage with antifungal and antibacterial properties has a pungent, resinous smell that was considered a cure for many ailments. A brush against the plant releases fragrant, aromatic oils that invigorate the senses.
A tender perennial shrub, rosemary will not tolerate temperatures lower than 10F. It can winter over on the West coast growing up to 6ft. tall but in Northern climates it can only be grown in a container. 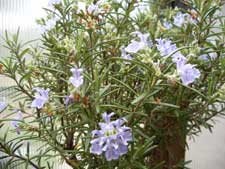 Care
Outdoors: Rosemary tolerates poor soil with good drainage and full sun to light shade.
Indoors: Place it in bright sunny window and keep the soil evenly moist but not waterlogged. Allow the water to drain freely and let it dry between watering. Brown needles indicate over-watering. In the spring around May 1 repot in fresh soil and set it outside. Slowly acclimate it to the outdoors by keeping it in protected semi shade for 1-2 weeks and then set it on a sunny porch or sink the pot into the ground for the summer. To maintain a compact shape, trim up to 1/2 of any leggy winter growth in the spring. Rosemary needs very little fertilizer during the growing season.

Propagation
Seed germination is very slow; therefore propagation from cuttings in the spring is the preferred method. :
To make new plants, take 4-6 cuttings, strip off lower leaves, dip in rooting hormone and insert in soilless mix. Cover the cuttings with a plastic bag (away from direct sun) to increase humidity. Rooting should take 4-6 weeks. Water rooting is another quick way to propagate rosemary. I have found that cuttings placed in colored blue or green glass root faster than clear glass. Rooting started after 2 weeks.

Wintering Rosemary
The dry indoor air is difficult for Rosemary to endure therefore allow the plant to remain outdoors for as long as possible and bring it inside around end of October. Keep it in a cool (45 degrees is ideal) well ventilated room with a south or west sunny location. Water less in the winter keeping it on the dry side. Try not to get the leaves wet and provide good air circulation to avoid powdery mildew. With a little luck it should make it through the winter, if not you can always purchase a new one in the spring.