Chlorophytum comosum also known as spider plant, airplane plant, ribbon plant originally from Africa and is a member of the large lily family. It was a popular ornamental houseplant in the Victorian era and still is today.

The variegated, strap-shaped leaves which grow in a cluster send out pale, yellow, wiry stalks which can get over two feet long. Initially, the cascading stalks bear small white flowers which later form little plantlets referred to as spiders. There are many varieties of Chlorophytum, some of the most popular cultivars are: C. Vittatum which has a wide white band down the center of the leaf, C. Variegatum has a white stripe down the outer margins and ‘Picturatum‘ has a broad yellow center stripe and ‘Mandaianum‘, a compact form with dark green leaves and irregular dull yellow-green stripes.
Spider plant is primarily used as a foliage hanging basket but recently it is also used as a landscape bedding plant in mild climates. They are frost-tender and grow in zones 9-11. 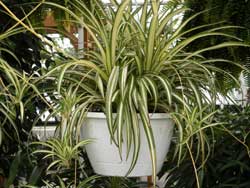 Care
Spider plants are generally easy to care for.  For optimal growth Spider plant grow in bright light with some direct sunlight during the winter. Keep it away from hot midday sun or you will scorch the leaves. It will also thrive in semi shade.  It does well at room temperatures 65-75 but grows poorly when temperatures are below 45 degrees.

Water
During active growth in the summer, water as often as needed to keep the soil moist and feed it every two to four weeks with a balanced fertilizer. In winter, keep it on the dry side, water just enough to moisten and then allow the top 1 inch to dry out before watering again. Pale bleached leaves will indicate that the spider plant is too dry and needs water. If the center of the plant is rotting then you are overwatering and keeping the soil to wet.

A healthy, mature plant will send out plantlets (when the days get shorter) which can easily be rooted in water or when if placed in moist soil.

Repot when the thick, fleshy rhizomes and roots are pot bound and force the soil above the pot rim level making watering difficult. This is also a good time to divide spider plant.  Division will produce a mature plant much faster than from plantlets.

Brown tips or tip burn can occur when the soil is kept too dry or hard/fluorinated water is used. Spider plants are sensitive to fluoride which can be present in low-grade fertilizer and city tap water; to avoid this problem use rain water and a good quality fertilizer. Overfertilization can also cause brown tips.

Dull gray leaves can indicate red spider mites. Look under and between the leaves for small webs.