Here is an interesting Irish folklore that you can share when carving your Jack-O-Lantern. It’s about a man named Stingy Jack. 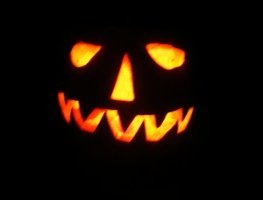 As the story goes, Stingy Jack invited the Devil for drinks. Once they were done, Jack , true to his nickname, refused to pay for the drinks. He convinced the Devil into turning himself into a coin, so that he could pay for the drinks. The Devil did so, but Jack, instead of paying for the drinks decided to keep the coin. He put it in his pocket with a silver cross so that the Devil could not change to his original form. After some time, Jack let the Devil change under the condition that he will not bother him for 1 year or take his soul, if he should die within that time. The devil agreed.

The next year, when the devil appeared, slick Jack talked him into climbing a tree to pick some fruit. While he was up in the tree,  Jack carved a cross in the bark of the tree. This time the devil had to promise not to bother Jack for 10 years.

Shortly afterwards, Jack died. The good Lord hearing about Jacks misgivings and lack of character, decided that such a soul did not belong in heaven and sent Jack down to hell. The Devil still feeling the sting of Jacks trickery, honored his promise and refused to accept his soul in hell. So Jack had nowhere to go; instead he was sent back into the dark night with only a piece of coal. Doomed to roam the Earth with only a piece of coal to light his way, Jack took the coal and put it in a carved out turnip to make a light.

As the story goes, whenever the Irish saw the ghostly figure, they said, “There goes Jack of the Lantern”. Later they shortened it to Jack o’ Lantern.

As the legend continued to grow, the Irish and Scottish thought it was best to make their own versions of Jack’s lantern by carving scary faces in turnips, beets or potatoes. They would place them on window sills and at the foot steps of doors to ward Stingy Jack and other evil spirits away.

This tradition was brought to the U.S. with the immigrants. It has been carried out throughout the years using the native pumpkins as the ideal Jack o Lantern.

for information on choosing your pumpkin

Leave a Reply to Maureen Click here to cancel reply.